If you're interested in the rise of street art in the Arab world, my first piece on the issue, beginning with Tunisia:

Tunisia: one of North Africa's top hotspots for graffiti art and culture

My piece on young graffiti artists from Tunis and beyond, for The New Arab. 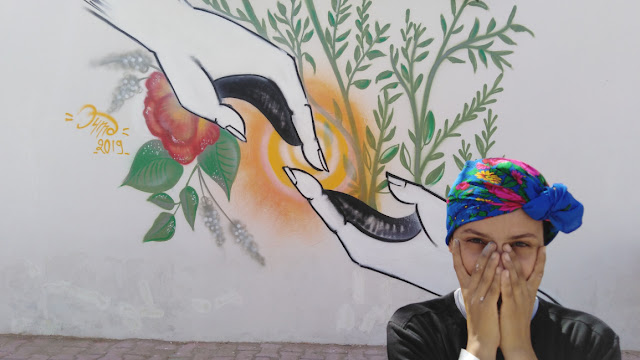 A decade after the revolution in Tunisia, urban art has helped transform the nation’s relations with public spaces. Local artists are encouraged to use Arabic as a means of graffiti. Now, a younger generation is ready to bloom, including women.

Posted by Melissa Chemam at 15:58 No comments:

Posted by Melissa Chemam at 20:59 No comments:

The 6th edition of Cinema Rediscovered is taking place this week at the Watershed cinema in Bristol, from Wed. 20 to Sunday 24 July 2022 with a line-up of brand new restorations and rediscoveries launching a UK wide tour (Aug – Nov 2022).

Posted by Melissa Chemam at 12:56 No comments:

This Monday in TMR Weekly: 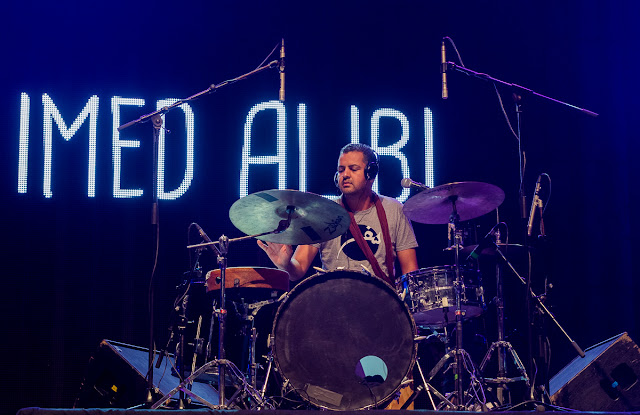 Posted by Melissa Chemam at 14:41 No comments: Arnolfini welcomes you to celebrate what lies above and below the forest floor with Forest: Wake this Ground, a major group exhibition including artists, writers, filmmakers, and composers from across the globe:

With works that recycle, reuse and repurpose resources, we will be discovering the forests’ ancient rhythms, as well as exploring stories, myths, and folktales, passed down between people over centuries.

The exhibition is accompanied by a programme that includes live performance, film, family events and creative workshops we will be inviting you to share and create your own ‘forest tales’ and to very gently encourage us all to take a look at the impact the changing climate has on nature and the world around us.

Forest: Wake this Ground’s final weekend includes Salvage Rhythms, an ongoing work which uses live performance, sound, film, text and collage to explore what humans can learn about how the other critters, organisms and intelligences we share this planet with come together in hidden, surprising and dynamic ways. Arnolfini will be home to the longest iteration of the performance yet – a total of three hours – with audiences free to come and go throughout.

Forest: Wake this Ground also marks the start of Arnolfini’s renewed approach to sustainable practice that will see an increased focus across all our activities and the implementation of a new sustainable action plan. We look forward to sharing our work with you as a core part of our programme.

Featured artists and their works in Forest: Wake this Ground include:

Chilean artist Rodrigo Arteaga deals with topical issues around absence and presence in his vast burned drawing series Monocultures, documenting the radical change in the forest floor, resulting from a major, government backed planting of the Monterey pine tree, now threatening many indigenous species. A new commission by Arteaga will also be made in response to local woodland on residency in the UK.

Irish artist and composer Mark Garry’s film An Lucht Siúil (The Walking People) looks at the relationships between land, movement and ownership through richly intertwined songs sung in both English and Shelta (the language of Irish travellers). A work first shown in his solo show Songs and the Soil.

Finnish artist Alma Heikkilä, whose work Flashing Decaying Wood, is made in part from pine wood, mycelium and alder flower ink, recreates the microscopic world beneath our feet, physically decomposing on the gallery floor.

French artist Eva Jospin’s towering and immersive sculpture Forêt Palatine, made from recycled cardboard, reflects the multiple material lives that have sprung from the rich resources of the forest. Its fantastical almost mythic depiction also hauntingly forewarns us of the possibility of their disappearance.

In her 2018 documentary, Wild Relatives, Palestinian artist Jumana Manna explores the tensions between human need and natural resources. Through the journey of seeds and the migrant women responsible for their replanting, the film tells the story of the Arctic’s Svalbard Global Seed Vault.

Language and soil lie at the heart of Bristol-based Zakiya McKenzie’s poetry, including Soil Unsoiled (originally commissioned by the Forest of Dean Sculpture Trust in collaboration with Khady Gueye) and Primordial Mother Speaks for Herself. McKenzie examines whose bodies belong to the forest, tracing her own ancestral threads to shine a light on racial inequality in rural spaces, bringing new timbre to the forests’ many narratives.

The ideas behind British artist David Nash’s ever-growing charcoal drawing The Family Tree 1967 to 2019, evolve like the trunk of a tree, that thickens and strengthens from the energy provided by each branch, providing a catalogue of decades of practice working with wood in multiple forms.

Intertwining her own ancestral threads, Brazilian artist Maria Nepomuceno’s complex woven sculptures utilise traditional craft and basketry techniques, reminiscent of plant and organic structures. A new woven-straw installation has also been commissioned which will be completed on site through ceramics made by Arnolfini’s community partners.

John Newling extracts soil from the ground to reveal the history of his own leaf-strewn back garden in Ground; language from the cores and a newly commissioned work, The Night Books burning forests, made from pulped texts, coal dust and crushed charcoal. The work physically released carbon through the process of making, re-enacting the exchange that lies at the heart of the forest floor’s survival.

Rosa Nguyen’s fragile ceramic and glass sculptures incorporate both living and dead botanical forms. Drawn together in a new installation the artist explores the ‘above and below’ of nature through hand-made porcelain, soil and hand-sized ceramic roots.

Ben Rivers’ film Look Then Below looks to the future, journeying into a subterranean world. Shot beneath the Mendip hills and ancient woodland in Somerset, the film reimagines a future in which the full impact of environmental damage inflicted by man is felt.

Chinese artist Ai Weiwei’s monumental upended ‘roots’, cast from the ancient and endangered Pequi Vinagreiro tree (found in the Bahian rainforest), reflect both the uprootedness of arboreal species and the displacement of people.

Canadian composer and sound ecologist Hildegard Westerkamp’s Beneath the Forest Floor was recorded in the old-growth forests of Canada’s Carmanah Valley in 1992. This creaking sound work transports the stillness and peace of these ancient forests to Arnolfini, asking us to consider if these trees still stand today.

‘Wake this Ground’ is  a line from the poem Soil Unsoiled, 2021, by Zakiya McKenzie and Khady Gueye, commissioned for Forest of Dean Sculpture Trail. 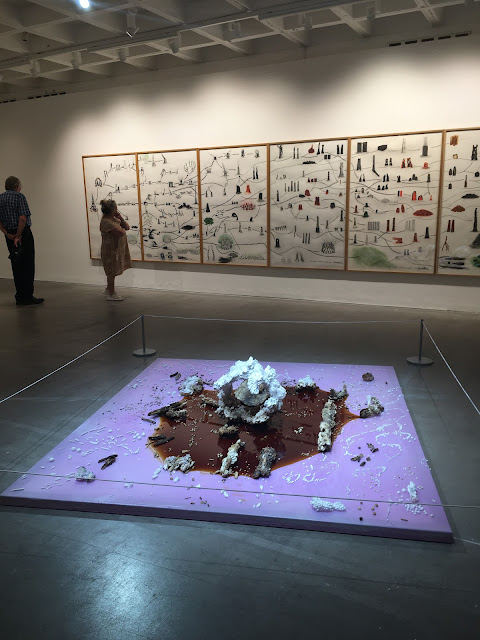 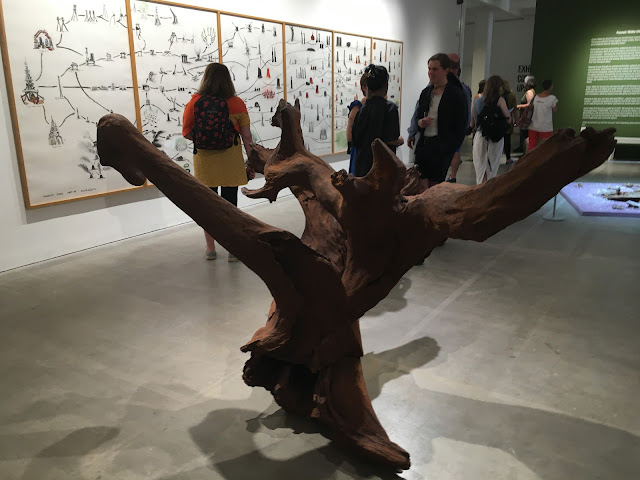 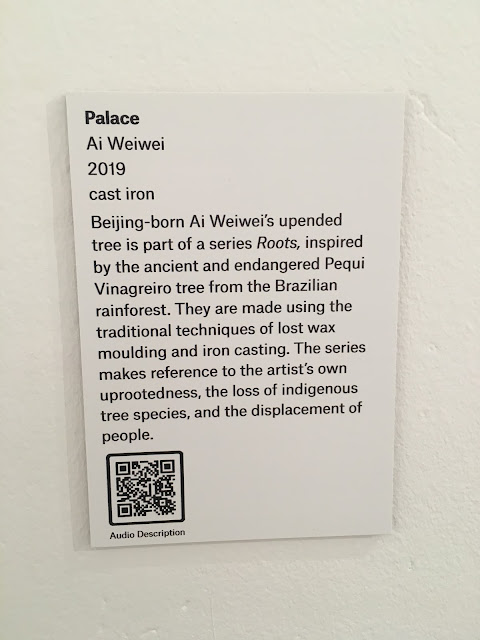 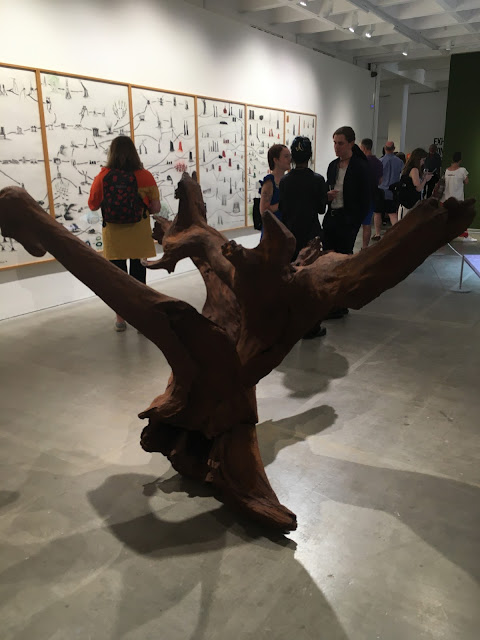 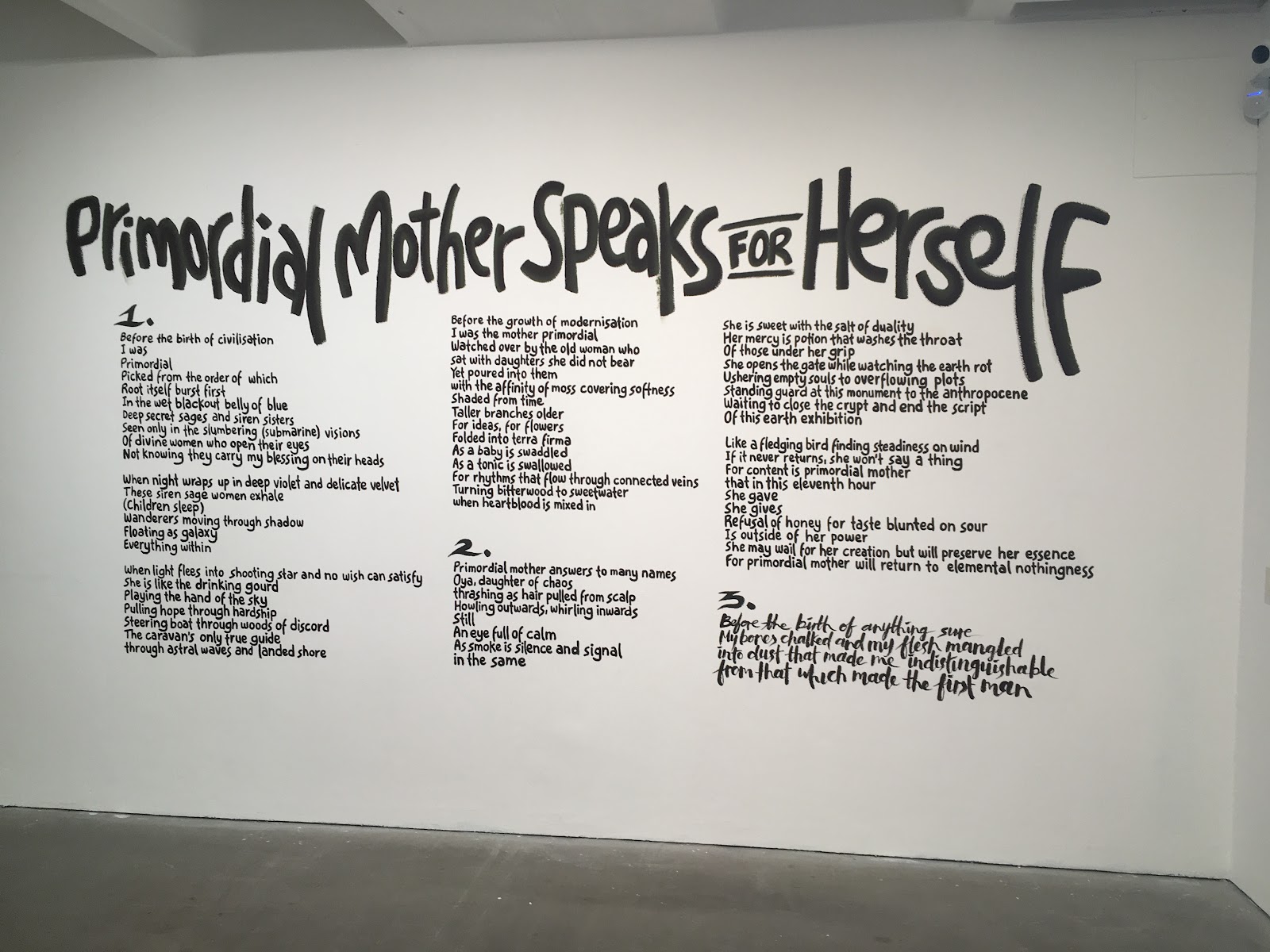 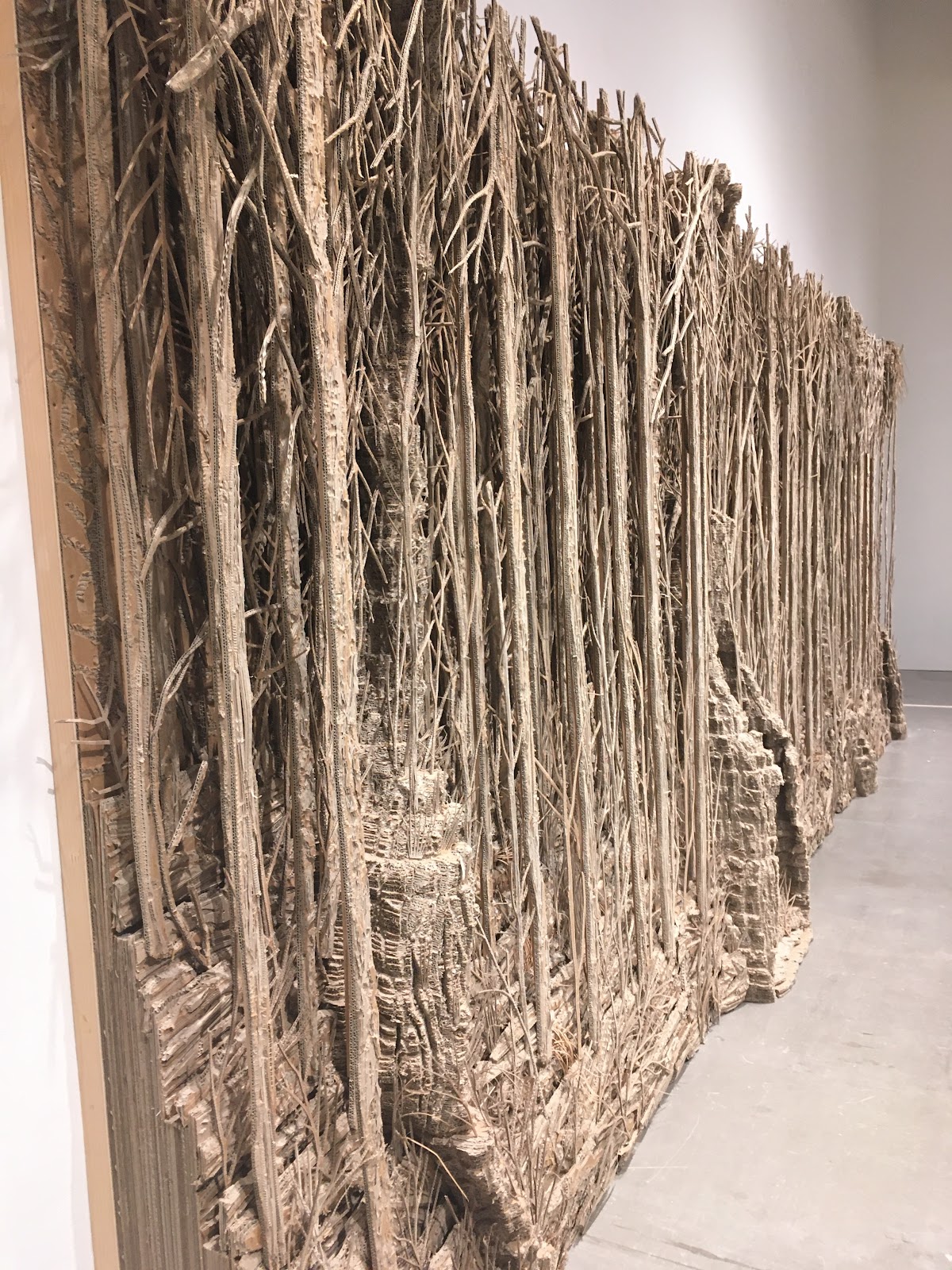 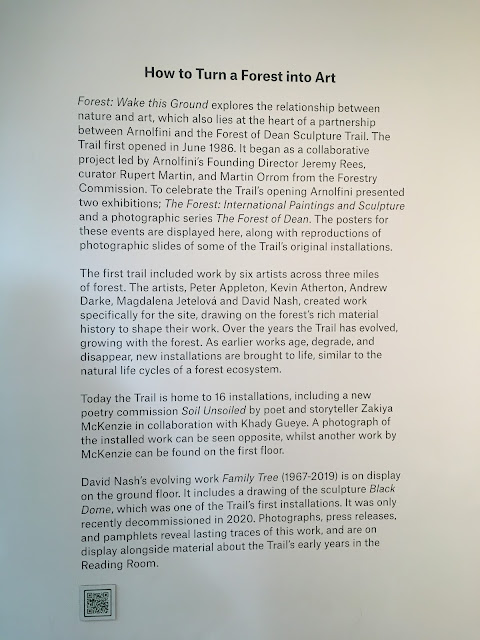 Posted by Melissa Chemam at 19:01 No comments:

In recent years, with the flow of refugees from West Asia and Africa streaming toward Europe, many have struggled to find acceptance and asylum in the UK, Germany, and several Nordic countries, but one city stands out as having become a preferred destination among Arab and other Middle Eastern immigrants, and that is BERLIN.

On August 15, 2022, The Markaz Review will publish an issue devoted to Berlin from the viewpoint of its SWANA refugees, in particular artists and writers, activists and educators from Afghanistan, Iran, Syria, Egypt, Algeria, Palestine, Israel and other countries south and west of the Mediterranean.

Is Berlin the “new Damascus” or “new Cairo” as some have called it? This population had the precedent of a large Turkish migration; as a result, are Germans in Berlin more receptive to and accepting of Muslims immigrants? Stories of adaptation and asylum, in the form of first-person essays, short fiction, photography, film, art and music are welcome. 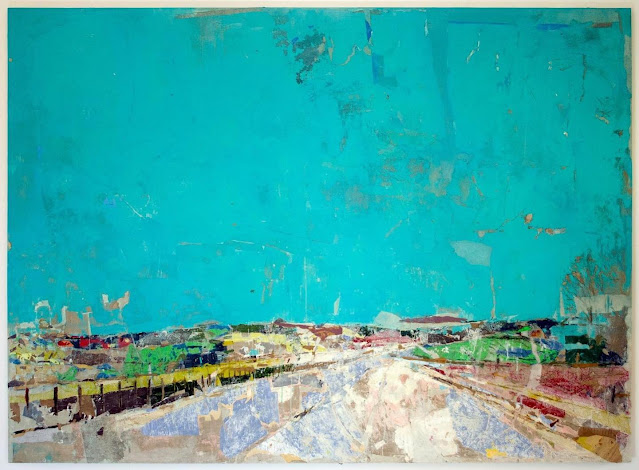 A city in Syria, paper collage on canvas, 2020, by Syrian artist Tammam Azzam, who recently moved to Berlin

Posted by Melissa Chemam at 17:37 No comments:

Avec Thanks For Nothing 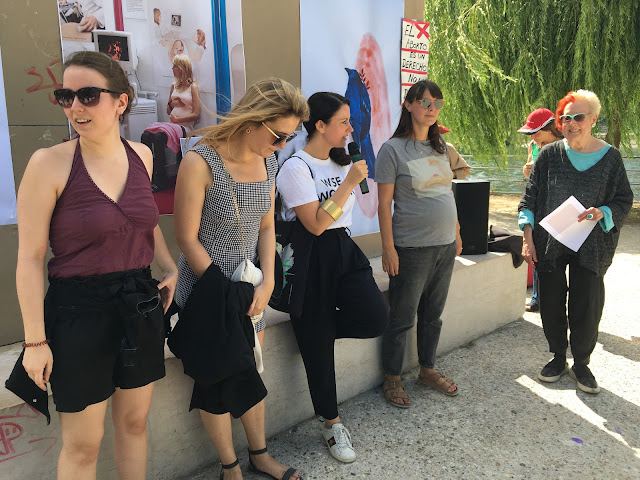 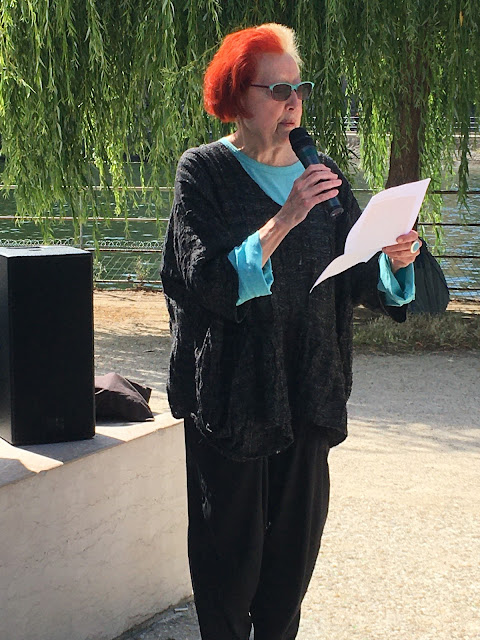 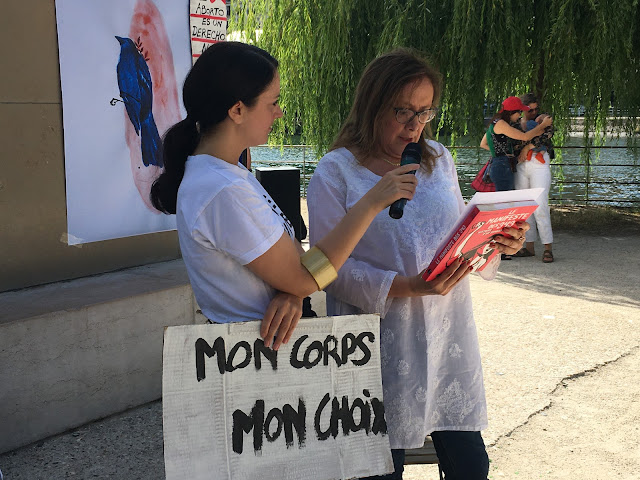 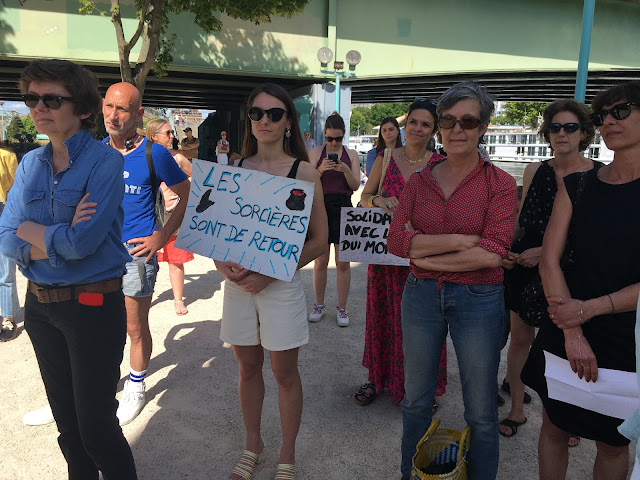 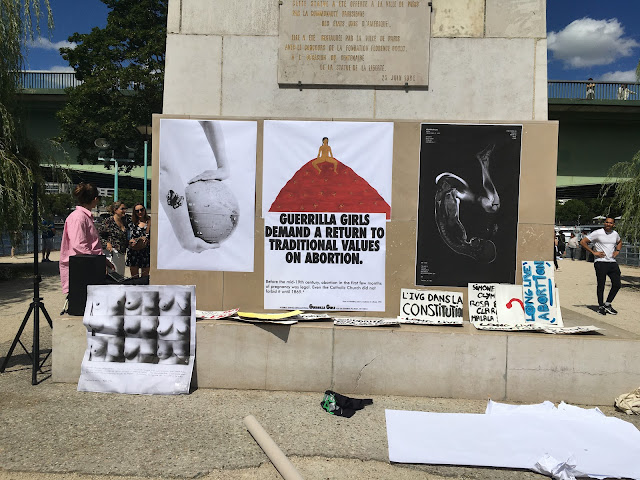 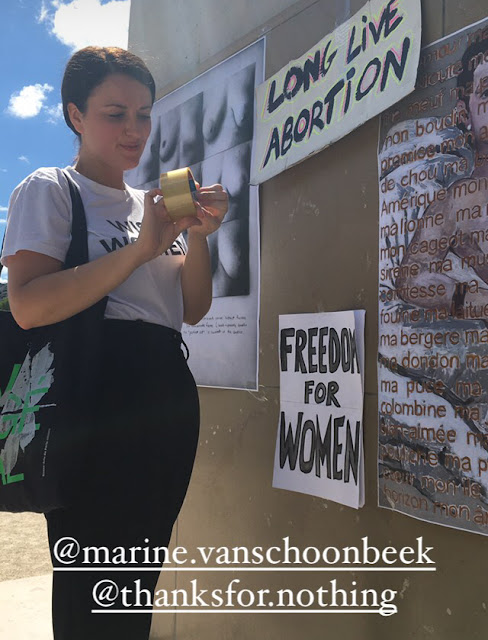 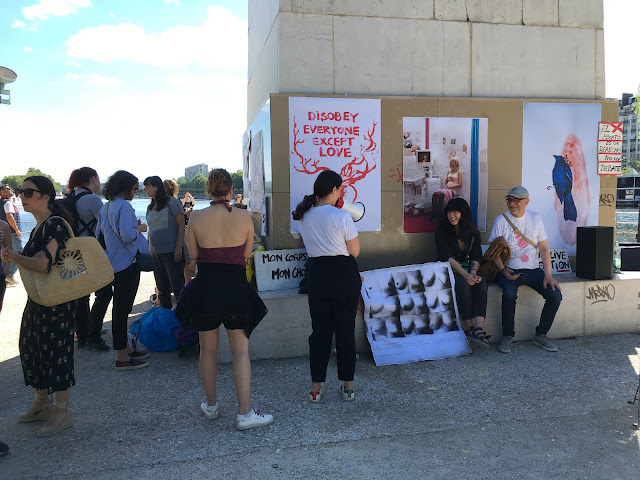 Dès les années 1920, les militants américaines avaient l'habitude de scander :
"No woman can call herself free who does not control her own body ; No woman can call herself free until she can choose consciously whether she will or will not be a mother."
Aucune femme n'est libre tant qu'elle ne contrôle par son corps ou si elle ne peut décider de devenir mère ou non.
- 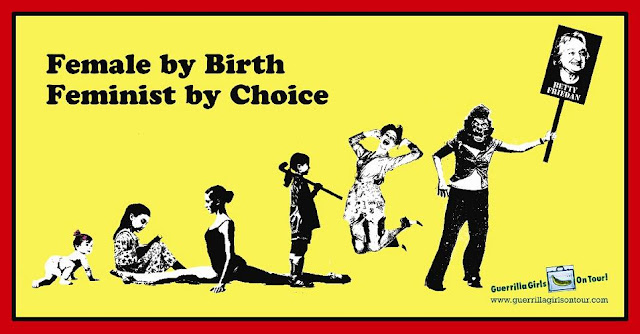 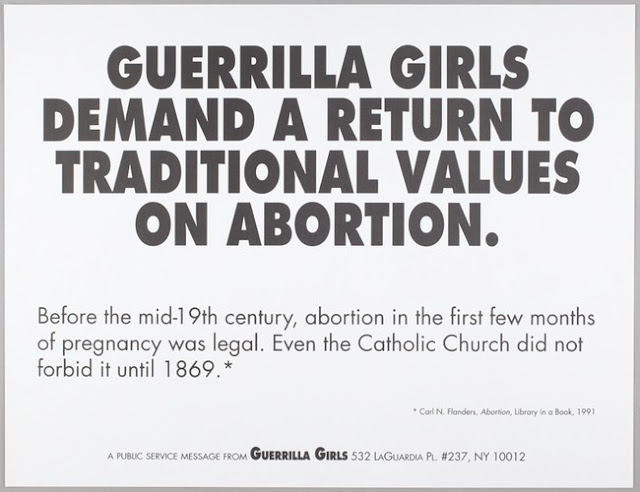 Dears friends, readers, art/music lovers and fellow journalists,
Greetings from Paris. I hope this message finds you all well, as we enter the best part of this year: Summer.
So far, 2022 hasn't been as politically hopeful as I wished, but many of us keep on nourishing our quest for meaning, connections and beauty... and I'm grateful to all of you.
As a migratory bird, I also needed a bit of movement, after a few odd years. Over the past & coming weeks, I have been and will be in between France, Belgium, England and Scotland. I'm also open to projects to visit Milan and Berlin too...
While in Europe, I'd be delighted to meet up again with those of you whom I've not been able to see often enough.
In the meantime, let me share my most recent work.
-
Refugee Food Festival 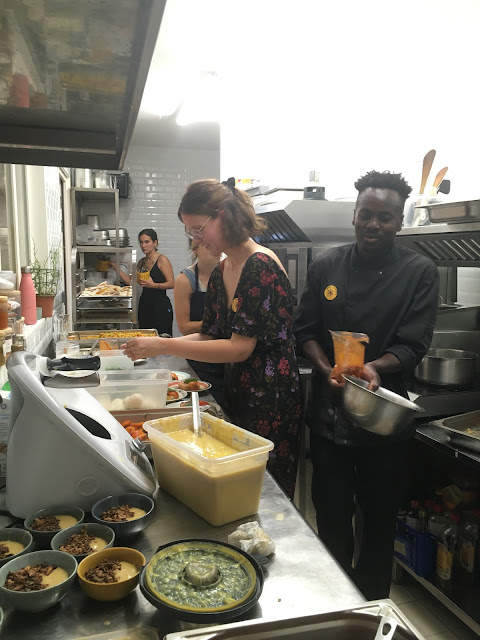 First, from Marseille, a little 5-min documentary about people helping refugees to integrate thanks to their talent for cooking: C'est en français - pour la DW.
Pour écouter:
http://melissa-on-the-road.blogspot.com/2022/06/refugee-always-welcome.html
Algeria through the arts:
I reviewed a couple of exhibitions celebrating the 60 years of independence of the country.
Read here about Zineb Sedira: https://themarkaz.org/zineb-sedira-triumphs-for-france-algeria-at-59th-venice-biennale/
And here about Algerian history through different artists and the journey of Emir Abd El kader: https://themarkaz.org/algerian-art-on-60th-anniversary-of-algerias-independence/ 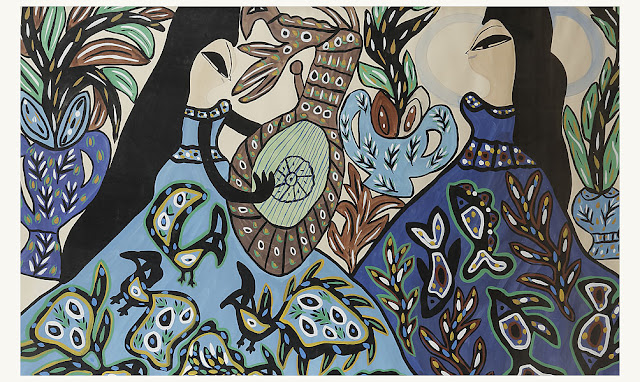 Invited as a guest on an American podcast series about similar issues, centred on fighting racism and neocolonial bias... We discussed issues around Algeria's struggle for equality and France's history of colonialism:
Discriminology Podcast
https://podcasts.apple.com/us/podcast/paris-massacre-and-the-algerian-struggle-for/id1521770510?i=1000564508544
Music from various grounds,
between the West & the East 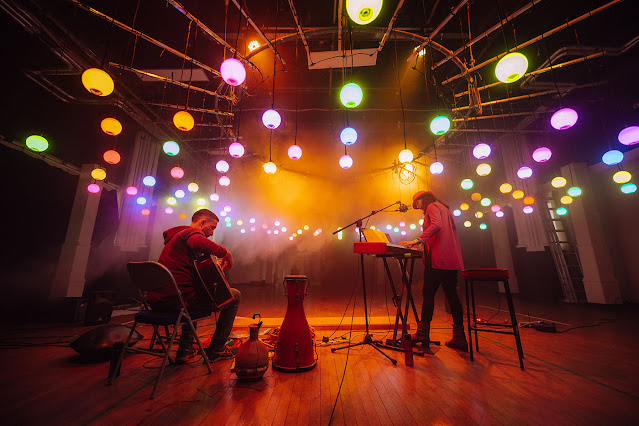 -
I wish you all a wonderful summer.
Let's hope to meet more often, on the road.
With my best wishes,
melissa
-
Melissa Chemam
Writer, Journalist, Audio Producer
(BBC, DW, The Markaz Review, Art UK...)
W: https://sites.google.com/view/melissachemam
Posted by Melissa Chemam at 19:20 No comments:

Melissa Chemam
Journalist, writer and travel-lover. I have been working on international affairs, arts & culture for more than 16 years. Main issues: African affairs, migrations, North/South relations, postcolonial studies, art, music, and suburban cultures. Worked with BBC, RFI, TV5, DW, CBC, F24 and diverse magazines. Born in Paris, I spent months in Prague, a year in Miami, two in London, one in Nairobi / East Africa, three months in Bangui and many more in Bristol, UK. I have a special relationship with cities: Bristol, Istanbul, Kampala, Naples, London, Mexico DF, Palermo... Also travelled to the USA, Haiti, the Caucasus, West & Central Africa, India... My first book, "Out of the Comfort Zone", on Massive Attack & Bristol was published in France in 2016 and in the UK in 2019. Contact: mchemam@gmail.com