My latest piece for The Markaz Review on a significant woman writer and French-Algeria novelist: 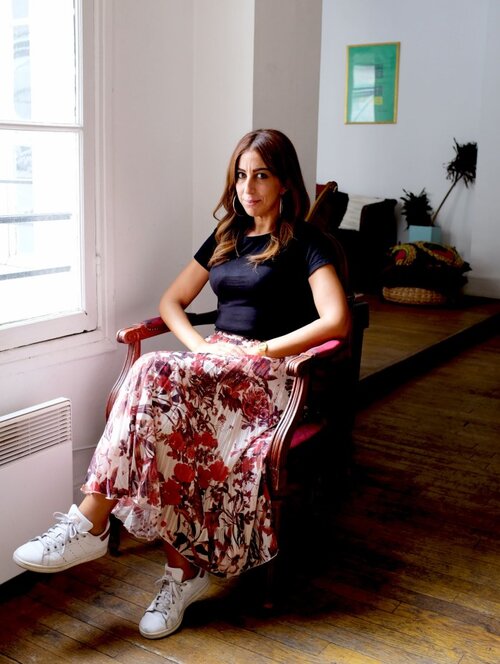 Melissa Chemam considers the sixth novel by France’s former teen sensation Faïza Guène and whether she is now part of the literary canon.

Back in 2004, a 19-year-old French novelist of Algerian heritage named Faiza Guène shook the French literary world out of its phlegmatic complacency with Kiff kiff demain (published in the UK as Just Like Tomorrow). A teenager from the disadvantaged suburbs of Paris, Guène’s debut novel, written mostly in French vernacular, went on to sell over 400,000 copies and was eventually translated into 27 languages. At the time, Guène declared her surprise, noting that for her, writing had so far been just a hobby. “There wasn’t really a role model for me…I grew up in a working-class neighborhood. I didn’t imagine I was going to make a career out of it,” she told RFI’s Tirthankar Chanda.

I must say that I feel very grateful to Faïza Guène. She broke new ground as a young Franco-Algerian woman turned into a booksellers’ sensation with a story about the banlieues. In fairy-tale fashion, this happened just a year before major riots in Paris’s suburbs. Yet Kiff kiff demain was not about life in the troubled or dangerous suburbs, it was about adolescence.

16 years and several books later, the author published her sixth novel in September 2020 in France. This time, in La Discrétion, she writes more intimately, deriving truth from her own family. The main character is Yamina, a 70-year-old mother of four children, living in Aubervilliers with a husband. They wedded 40 years prior, in Algeria, in an arranged marriage. That took her to France, where she had never before set foot. This is a story of migration that is very familiar to North Africans in France—working-class communities in which many factory workers opted in the 1950s and 1960s for an arranged marriage with a younger woman from their homeland, and not a local, French (white) spouse. Yamina, a petite, kind-hearted woman, never had a job but raised their children. She and her husband have a lot in common with Faïza’s parents, born around the same time in the same circumstances and with the same destiny of migration.

The story isn’t so much about life-changing events, or even Algerian independence as it is about the everyday tribulations of a very humble family, in which all members feel at a point or another—and some feel this oppression on a weekly basis—humiliated by their position on the French social ladder, which is often characterized by a kind of invisibility. As the title suggests, this “discretion” starts with themselves, as Yamina chooses to remain discreet when mistreated, even when her doctor hurts her physically, or speaks to her too casually. The novel doesn’t address the issue in depth, but through a few anecdotes we feel that the French system doesn’t give her a chance to speak up for herself.

I started this review by saying I was grateful to the writer because, for once, a book by a well-known bestselling author doesn’t mention the Algerian war only through the eyes of French people, pieds noirs who had to leave their “beautiful Algeria” because of ungrateful locals chasing them away. Writers like Yasmina Khadra and Alice Zeniter have both written fine books about the 1950s in French Algeria, but not through the eyes of local natives who believed in their independence. Here, La Discrétion is divided into two sorts of chapters: the first ones retell the non-eventful, family-oriented life of Yamina and her intimates, with the intention to pay homage to the anonymous in French society and especially stay-at-home mothers in working-class families; and the other chapters dig into Yamina’s memories and past life in Algeria, from the harassment of her family by French soldiers; her birth “in a cry”, as the narrator describes, a metaphor for her future moral strength; her family’s exile in Morocco during the independence war; and her marriage and her move to France, in tears. Yamina’s father was a fellaga, a freedom fighter who battled for his country’s independence from France.

The chapters featuring Yasmina’s memories are the most charming. They describe her difficult but meaningful childhood in Algeria, with her war-traumatized mother and a father she puts on a pedestal for his involvement in the independence movement. Yamina worships the memories of their fig tree back home; all her family responded with courage, even when the women were sent away in exile in Morocco to avoid the war, facing famine. These chapters are also filled with other characters, and not reduced to a narrow sort of unaccomplished sub-life only, as are the chapters set in Aubervilliers and Paris in 2019-2020, which are characterized by a fair amount of repetition.

When dealing with France, the novel follows Yamina’s family, described as people who would only be minor characters with a brief mention in other books, as they are in Leila Slimani’s award-winning novel, Chanson Douce (Lullaby in English), in which the Arabs are only of secondary interest, if that. Here, the main characters are all workers with humble jobs and all Algerians, which is formidably rare. The father, Brahim, was a miner before retiring; the brother, Omar, is an Über driver; one of the sisters, the eldest, Malika, works in the local town hall; the other one, Imane, the youngest, is a saleswoman; and Hannah is… more or less professionally angry for everyone else in this society that appears profoundly discriminatory and sometimes outwardly racist.

None of them ever escapes their milieu. For instance, for years, Omar drives by the luxury hotel Lutetia, but never dares to actually go in until the very end. Most of them feel they don’t belong in nice French places and in most of central Paris.

Fortunately, none behaves in the way that typical suburban stories in French films depict French North Africans, as drug dealers, thieves or thugs (consider La Haine, Les Misérables or even Taxi, set in Marseille). Here, for 250 pages, we observe a loving family, and especially a mother who went through a lot of pain as a child, and whose story will never be heard by her neighbors, her children think, let alone any other French citizen. People making no particular trouble.

Yet, as a French woman who also grew up in a Parisian suburb, with an Algerian dad who came to work in Paris in a factory in the 1950s, and a mother who married him in the late 1970s, then joined him in France without having ever seen the country previously, I can’t help but feel frustrated at these portraits of lovely people whose main social occupation is to remember the price of every item they ever buy.

Yes, Hannah praises her mother for her strength, and she is angry at racism and humiliation she undergoes, but she doesn’t do anything about it. Actually, none of them ever really tries to change their lives. Malika, the first born, has to endure an arranged marriage just like her mother did, and unfortunately her father chooses really unwisely so she divorces once she discovers her husband had a child with a French lover. Afterwards her father only feels pity for her, sees her as “damaged goods.” She never remarries and none of her sisters even try to. They all seem to have trouble falling in love—they resent French men for not being masculine enough, and Arab men for looking for French trophy wives to reward their self-projected integration, the Holy Grail for an immigrant in France. In that matter, La Discrétion is no feminist novel.

The family’s culture is also limited to a few television programs and the mother’s quotes from her prayers and the Qu’ran. They don’t feel French and don’t even try to be French, spending all their summer vacations in Algeria with their mother’s family, except the last one, in 2020, when they discover the Poitou-Charente region.

The depiction of these first-generation French Algerians wants to be loving and accepting, but it risks being alienating by virtue of the sum of its clichés on Muslims and their cultural desert, naming more supermarkets, brands and suburban malls than a Simpsons episode ever could. Something in me is really saddened by the fact that French immigrants can only represent themselves as humiliated, not fitting in, feeling half the time like failures or looking a bit like caricatures, wearing burkinis and eating cheap halal Chinese food. It’s not Faïza Guène’s fault, of course; it’s mostly because France has so few Muslim or Arab writers, the most successful and known being Nina Bouraoui (whose mother is Algerian), Rachid Djaïdani and Sabri Louatah (author of the brilliant novels Les Sauvages or Savages in English and 404).

(We should note that Kaouther Adimi writes in French but she is Algerian, like Yasmina Kadra; she was born in Algeria, spent a few years in France as a child, but studied in Algeria and was living in Algeria until 2009.)

Faïza Guène is calling for more acceptance, through the eyes of her female characters especially, in a France that is every day nearly as racist as it was in the 1950s, considering that the Macron administration is openly discussing the arrest of so-called Muslim “separatists”. And she mentions in passing that the attacks on the World Trade Center and Charlie Hebdo only made the country more Islamophobic.

The French literati has mostly praised La Discrétion, while they came down hard on her first novel, often not taken seriously because of its heavy use of slang and humor.

Unfortunately for now, unlike the likes of Salman Rushdie and Zadie Smith, whose novels have become more broadly universal both in the UK and within the Anglophone literary world, France’s generation of Arab/Muslim novelists mostly represents members of ethnic minorities as lonely outcasts, with no sense of belonging or desire to fight for greater inclusion. Too often, their stories end with some version of failure and tristesse. This may be a reflection of the state of French diversity, or lack thereof. For now, with her novels, Faïza Guène doesn’t really celebrate the empowerment of first-gen French citizens of immigrant heritage; she puts them on the radar and describes their isolation well, but doesn’t embody a bold and proud appearance into the French cultural landscape. But she definitely stands as a rare and important French-Algerian female voice.

According to Faïza Guène’s English translator, Sarah Ardizzone, Discretion will be published in early summer 2022, while her novel Men Don’t Cry (Un Homme ça ne Pleure Pas) will be published by Cassava Republic in July 2021.

Melissa Chemam is a writer, broadcaster, cultural journalist and author. She has been based in the USA, France, the UK and East Africa (for the BBC World Service, AFP, Reuters, CBC, DW, RFI, etc), also traveling to North Africa, the Middle East and the Caucasus regularly. She works mainly on multiculturalism, post-colonial issues, East-West and North-South relations, and is an associate lecturer at the University of the West of England in journalism. She is a TMR contributing editor.

Melissa Chemam
Journalist, writer and travel-lover. I have been working on international affairs, arts & culture for more than 16 years. Main issues: African affairs, migrations, North/South relations, postcolonial studies, art, music, and suburban cultures. Worked with BBC, RFI, TV5, DW, CBC, F24 and diverse magazines. Born in Paris, I spent months in Prague, a year in Miami, two in London, one in Nairobi / East Africa, three months in Bangui and many more in Bristol, UK. I have a special relationship with cities: Bristol, Istanbul, Kampala, Naples, London, Mexico DF, Palermo... Also travelled to the USA, Haiti, the Caucasus, West & Central Africa, India... My first book, "Out of the Comfort Zone", on Massive Attack & Bristol was published in France in 2016 and in the UK in 2019. Contact: mchemam@gmail.com